Tough Love for Schools: Essays on Competition, Accountability, and Excellence

About this title Synopsis: These essays by the leading young scholar of education reform explain the critical importance of accountability, competition, and flexibility in fixing what's wrong with America's schools. We also have a good selection of fine art and photography books. Located near the University of Chicago, we offer free book searches to our neighborhood and extend this service to our Internet customers as well. Please contact us with details of what you are looking for.

We network with other Chicago area bookstores and may be able to find what you have been looking for. Visit Seller's Storefront Terms of Sale: We guarantee the condition of every book as it's described on the Abebooks web sites. More Information. Charter schools got a boost, too. In retrospect, it's evident that NCLB was a bridge too far. For many on the right, it came to be seen as a prime example of Bush's "big government conservatism. The Obama administration made things even worse when it encouraged states to adopt the controversial Common Core standards in exchange for Race to the Top funds, then forced new mandates on schools in return for flexibility with some of No Child Left Behind's most onerous provisions.

At the time, even many of NCLB's original supporters agreed that it was time to clip Washington's wings in education.

They argue that conservative education reformers should jettison standards and accountability and instead focus on choice alone. Though it's easy to lump conservative school-choice advocates into a single category, there are some major disagreements between those who argue for school choice alone and those who wish to combine it with other reform strategies.

The first and perhaps the most fundamental of these disagreements can be reduced to one question: Is parental satisfaction enough?

To better understand this question, a simple thought experiment is clarifying: Imagine that conservatives are wildly successful in expanding school choice. Every parent in America, however poor or rich, gains access to several educational options, including religious schools.

In a thriving marketplace, these schools compete to attract market share, innovate in ways currently unimaginable, and provide unprecedented levels of customer satisfaction. School choice turns out to be everything conservatives promised it would be. But what if, with all of that, America's international rankings in reading, math, and science are still mediocre, or even decline? What if upward mobility for poor students remains stuck at low levels, and intergenerational poverty remains widespread? Could we really declare victory? But what if that doesn't happen?

Are we really content with customer satisfaction as the measure of our efforts? If parental satisfaction is all we're after, it shouldn't be terribly hard to achieve.

Putting Men Back to Work

Polls find that most parents are already happy with their schools. Yet a closer examination of America's educational outcomes indicates that our schools are mediocre almost across the board. The math and science skills of our affluent students are middling compared to affluent students in other countries; our children of college graduates do so-so compared to the children of college graduates elsewhere. But there's another gap, between the lofty perceptions Americans have of their own children's schools and the objective truth, at least as measured by results.

Why so many parents, including affluent and well-educated ones, are satisfied with schools that provide mediocre outcomes is something of a mystery.

Perhaps they want to believe their kids' schools are better than they actually are to avoid feeling guilty about paying for that kitchen renovation or new SUV instead of private-school tuition. As education reformer Jason Bedrick recently wrote, "Parents are interested in more than scores.

Studies by Hoover economist Eric Hanushek, for instance, demonstrate a strong relationship between the cognitive ability of a nation's population and economic growth. School quality also has an impact on upward mobility. When Raj Chetty and his colleagues examined the likelihood that individuals growing up in poverty would make it to the middle class or beyond, the quality of area schools was one key factor.

But what denoted quality wasn't spending or class size, but test scores. New studies by Hanushek and his colleagues might explain why. Because of our freer economy and lighter labor-market regulations, education really is what helps people get ahead. Assuming that conservatives don't want to embrace European-style economic models, developing high-level skills is essential for our children.

At this point, it should be clear to everyone that Americans with low skill levels are at grave risk of being left behind. Finally, great schools can even have an impact on family formation. A random-assignment study of career academies by MDRC an education-research organization found that young men who went through high-quality career and technical programs in high school were more likely later to be married and to have custody of their children. If we care about economic growth, upward mobility, and strong families, we should make improving America's educational outcomes a priority.

Most choice-alone advocates concede that improving America's overall education outcomes is a worthy goal, but they are convinced that a purely market-driven system is likelier to get us there than one that combines choice and results-based accountability.

This leads us to a second defining question: Should schools be held accountable for results? It's useful to separate the question into two parts.

First, does accounting for results make sense for traditional public schools? Second, should charter schools, voucher schools, and other school-choice programs be accountable for measurable success in addition to customer satisfaction? Let's take each one in turn. The question of whether public schools ought to be held accountable for results seems like a no-brainer: Of course they should. While it's true that "competitive effects" can spur public schools to improve, the impacts to date are mild, limited to the relatively few schools that actually face competition, and dwarfed by the good that comes from results-based accountability.

One well-known early study by Stanford economist Caroline Hoxby demonstrated that there were greater academic improvements in a metropolitan area with many smaller, competing school districts than in one with fewer, larger districts. More recently, scholars have found that both charter schools and voucher programs can encourage nearby public schools to improve, at least as measured by student test scores.

A recent study in Washington, D. Other studies have found negative effects, though, as traditional public schools lose some of their best students to charters. The best way to describe the evidence is "mixed": The effects are relatively small and mainly confined to schools that actually face competition.

As Dennis Epple, Richard Romano, and Ronald Zimmer wrote in a review of relevant research, "Where charters have small shares, it may be unrealistic to expect charter schools to exert much of a competitive effect. Results-based accountability, on the other hand, has been shown to boost outcomes significantly across a broad set of schools.

Several rigorous studies have shown that the simple act of labeling schools as underperforming can lead to improvement, especially in math, and particularly for the lowest-scoring students. In one well-regarded study, Thomas Dee and Brian Jacob found that accountability's impact on math performance was significant, especially for younger, disadvantaged students.

Of course, not everyone agrees on the implications of these test scores.

Jay Greene, a leading school-choice proponent and head of the Department of Education Reform at the University of Arkansas, has lately argued that test scores are weak predictors of long-term outcomes like high-school or college graduation. Yet Greene waves off several high-quality studies that demonstrate precisely this link. One, by Chetty and colleagues, linked test-score growth with later earnings gains. The Hanushek studies connect test scores to economic growth. And long-standing research on other education interventions indicates that short-term test-score gains predict important long-term outcomes, from lower rates of incarceration to higher rates of graduation.

Plus, a National Bureau of Economic Research study found that the threat of sanctions against low-performing schools in Texas led to increases in their pupils' college enrollment, college completion, and eventual incomes. Strong evidence indicates that accountability, done right, can spur public schools to improve. Choice-only advocates may protest, though, asking yet another question: Are the benefits of accountability worth the costs? It's no secret that testing is increasingly disliked by both parents and teachers.

They tell pollsters that high-stakes tests force teachers to "teach to the test," narrow the curriculum to tested subjects, encourage schools to focus solely on students who are at risk of failing, and dry up any joy and inspiration that children might have otherwise found in learning. It's true that some studies have found evidence of narrowed curriculums and aggressive test-prep practices in certain schools. 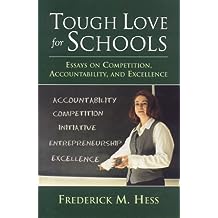 There's a solution to these problems, though: improving the tests, so that only good teaching can prepare students to do well. This is not a new idea.